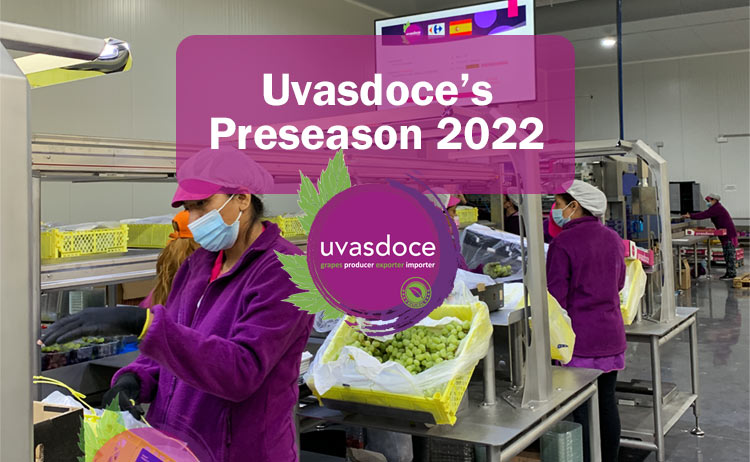 The upcoming season 2022 brings many changes that portray the nearest future of Uvasdoce.

Growth, modernisation, new varieties and difficulties in the supply of materials are some of the key issues for this season.

Uvasdoce increases its number of productive hectares thanks to the cultivation of a new farm that reaches over 40 hectares.

This new field is located in the heart of the Vinalopó Valley and is very close to the workplace, in a privileged area for the cultivation of table grapes.

It has been named ‘Finca Uvasdoce’ to pay tribute to its own name and has become its main farm due to its size, innovations regarding the varieties and other projects nobody will remain indifferent to. It also increases the production of many of its most popular seedless varieties, such as Sweet Celebration™, Sweet Globe™, Cotton Candy™…

In order to achieve that increase, the entity from Alicante has invested at the same time in the expansion and modernisation of its current workplace in Monforte del Cid, creating new split-shift jobs by acquiring a new state-of-the-art production line from the English company MARCO LIMITED, who are specialised in solutions that improve the productivity of big companies, and updating two of its most traditional lines using the same system.

Besides, it has extended 600 m2 its high-performance cold storage.

This new scenario glimpses opportunities to enter new markets with appealing propositions for them.

However, thanks to the increase of kilos produced and the high demand of its products, Uvasdoce will be able to approach different Asian countries, such as Singapore, Malaysia, Hong Kong, etc., where, even though they didn’t export big quantities of their essential seedless grapes, business had already been started.

Another of the destinations that build a lot of interest is located on the other side of the Atlantic Ocean, where they haven’t ventured to go yet due to the demand from their close, faithful clients, who have been using up their stock up to now.

“New International markets such as Singapur, Malasia or Hong Kong”

In conclusion, there are many changes for this season 2022, whose warhorse are the rising prices and the lack of raw materials (cardboard, plastic), fact that affects every sector in general, but especially the fruit and vegetable one.

This website uses cookies to improve your experience while you navigate through the website. Out of these, the cookies that are categorized as necessary are stored on your browser as they are essential for the working of basic functionalities of the website. We also use third-party cookies that help us analyze and understand how you use this website. These cookies will be stored in your browser only with your consent. You also have the option to opt-out of these cookies. But opting out of some of these cookies may affect your browsing experience.
Necessary Always Enabled
Necessary cookies are absolutely essential for the website to function properly. This category only includes cookies that ensures basic functionalities and security features of the website. These cookies do not store any personal information.
Non-necessary
Any cookies that may not be particularly necessary for the website to function and is used specifically to collect user personal data via analytics, ads, other embedded contents are termed as non-necessary cookies. It is mandatory to procure user consent prior to running these cookies on your website.
SAVE & ACCEPT